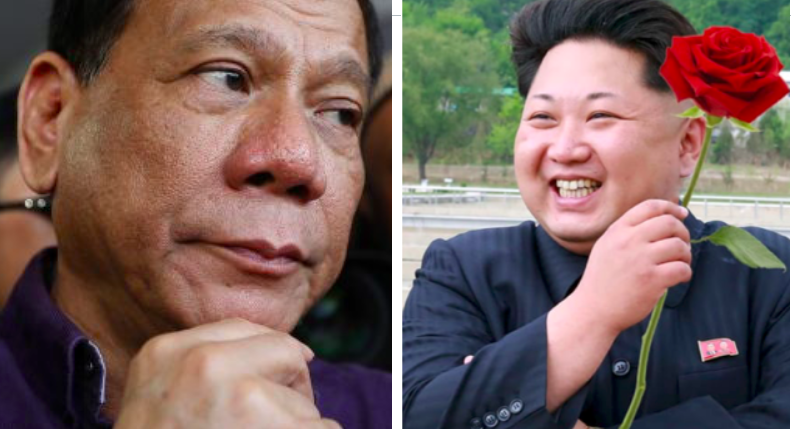 President Duterte described Kim Jong Un as his idol following a meeting between North Korean leader and his southern counterpart.

He also described the dictator as the “man of the hour” after he and South Korean President Moon Jae-in met to discuss the denuclearisation of the Korean Peninsula and an official end to the Korean War.

“He is now my idol,” he said. “For all of the time, he was pictured to be the bad boy of the community.”

He added that with “one masterstroke”, Kim was now the hero of everybody. “He appears to be amiable, jolly good fellow, and very accommodating,” he said at a press conference his return from Singapore to attend the 32nd ASEAN Leaders’ Meeting in Singapore last weekend.

Previously, the president has described Kim as a “chubby son-of-a-whore maniac”.

Now, however, he has expressed hope that the North Korean leader would remain in his good books.

“Nobody is really after him. Just a matter of historical divide which was created there, the rest of the world is really part of it,” he said.

He also said he hoped to meet Kim one day and be able to congratulate him.

Once they meet, the president said he would tell the North Korean leader, “I’m impressed with you. You had it at the right time.”

He also said he hoped that Kim would consider him as a friend.

On the impact of the North and South negotiations, the president said it was a positive development. “And maybe, just maybe, we can avoid a war which nobody can win anyway,” he said.

“Then maybe you can say goodbye to planet Earth.”

During Friday’s Inter-Korean Summit, Kim and Moon met at the South Korean side of the truce village of Panmunjom to discuss negotiation for the denuclearisation of the Korean Peninsula.

The leaders of the two Koreas also pledged to formally end conflict in the region, more than six decades after hostilities ceased in 1953 with an armistice, but not a peace treaty.