All across the Philippines mounds of plastic pollution of varied sizes, can be found spread out across the lush, green vegetation that makes the Philippines so beautiful. Like a multicolored wound in some cases, or a dried-up scar in others, it is a blemish on the otherwise majestic landscape.

For an issue that is pressing both on the international level and in the local community these discarded plastics, that will last beyond our lifetime, blur the image of the wonderful country and its people. It sets a poor example to lure others to come and see the beauty of this country.

A mindset of discipline?

Filipinos often say, in word, in print and even on social media, “Walang disiplina”, or, there’s no discipline. The meaning is clear that people have no self-discipline.  Is this the case?

The small picture; home and neighborhood

Inside nearly every Filipino home, at any given time, someone might be found sweeping, dusting, washing or scrubbing. Shoes are most typically left outside in the common Asian tradition. These are simple concepts commonly taught to children at home and across all social-economic groups.

Cleanliness as a matter of internal discipline can be a learned behaviour through reinforcement and repetition. And children learn well through repetition. Thus, consistent external dialogue and appropriate example becomes internalized and instills self-discipline. Not only in the Philippines but globally, this mindset is widely known to stem, for the mass majority of children, in the family and in the home.

An academic abstract in Sage Journals reads: “By the time children begin formal schooling, their experiences at home have already contributed to large variations in their math and language development, and once school begins, academic achievement continues to depend strongly on influences outside of school. It is thus essential that educational reform strategies involve primary caregivers.” The abstract goes on to illustrate the importance of programmes, like Early Head Start (a US early childhood education programme) and others on developing parents as early teachers for children.

Outside the home – what happens?

However, once outside of their supportive environments, Filipino children see the littered garbage all around their neighbourhoods; and as they grow older see the even more threatening concerns of system breakdown. Those children often see how the failures of the system impact their homes. Trash left uncollected in barangays due to collection effort failures causes a build-up of trash in the home.  Something so simple as a lack of public waste bins encourages littering. Poverty results in the ubiquitous use of plastic bags for children who don’t have a few extra pesos for the deposit on a returnable (and reusable) cola bottle. Like waves across the newly recognised oceans of plastic pollution in our seas, the ripple effect of broken systems can be seen by children and in turn, they can internalise a sense of hopelessness as an impediment to change the current realities

Often, because of lower incomes, many Filipino consumers are faced with making purchases that are the least expensive possible. Everything from cookies to cigarettes can be purchased individually or in smaller, individually wrapped packaging. Unfortunately these individual packages, typically wrapped in plastic, contribute to the overall pollution catastrophe felt in the cities and provinces. These are smaller, homegrown problems. But, what about global pollution concerns?

From whence cometh the wave; North America and the western world.

Less than 10 per cent of plastic used in Canada gets recycled, according to the Canadian government, who said in a recent statement that Canadians will throw away an estimated $8.3 billion worth of plastic materials each year, by 2030, unless corrective measures are taken. Prime Minister Justin Trudeau announced in early June that Canada will follow the lead of the European Union and ban single-use plastics as early as 2021. Is it too, little late for the Philippines? President Duterte recently made the news by suggesting he was ready to declare war on Canada if the country refused to accept the return of tonnage after tonnage of deceptively declared waste. Is 2021 too little too late, Mr. Trudeau?

Many would say there is no such thing as too little, too late, as opposed to doing nothing. Among those many are China, Malaysia, Vietnam and others who are no longer hospitable to the idea of accepting the West’s trash, even if it was President Duterte who got the headline and the sound bite expressing their collective frustrations.

Waste disposal as an item of a political dispute between Southeast Asian countries and the developed world has recently become more topical, with not only the Philippines but recently Malaysia demanding nations such as the United States, Japan, France, Canada, Australia, and Britain take back 3,000 tons of plastic waste.

But, it isn’t only Canada and President Duterte

The 2018 US Census provides data that demonstrates the United States shipped 157,000 20-foot-large shipping containers (or 429 per day) of plastic waste to countries that are identified as deluged with plastic waste and are often major sources of plastic pollution in the ocean.

The World Economic Forum and Ellen MacArthur Foundation revealed through their research that “…by 2050 there could be more plastic than fish in the sea at the current rate of production”.

Nor is it only North America.

A report from the BBC recently articulated that the United States takes the lead for exporting plastic waste for a single country, the European Union, overall, is the largest exporter of plastic waste.

The World Economic Forum research shows that the largest amount of plastic waste is produced across the Mediterranean countries of the EU and the British Isles. With Scandanavian countries doing a better job of reducing plastic waste.

Next Steps; changing a generation

While this article stresses the importance of instilling environmentalism in children at an early age, and in the home, clearly there remain roles for schools, churches, civic organizations, and government agencies to support this edification of young people. Lesson plans can include age-appropriate environmental awareness. Churches and civic groups can do clean up or community projects. Government agencies can support the three pillars of home, faith, and schools in promoting better behaviours. The collective helping strategy of Bayanihan, the Filipino concept of the community working together for a common goal, might just be the answer. Not only for the Philippines but for the rest of the globe, too.

It is one lesson to teach children to be neat in their homes and schools but quite another matter, altogether, teaching neatness on a grander scale through waste reduction, green energy, conservationism and the reduction/elimination of plastic waste in general. Reaching children at a stage in early childhood development where they are ready to internalise a message of not only cleanliness in their home but on their home planet.

The other bigger picture. Trees, Air, Water, Climate and Population

Just as it is easier to teach the ideas of waste management on a micro-level in the home, it may appear easier to isolate issues and not see the interconnectivity of pollution and environmental destruction as they apply to find an encompassing solution.  Air pollution and the oxygen generating capacity of trees is fairly commonly known. Clean waterways blocked by garbage creates a lack of access to healthy, clean water. Plastics in the oceans impact food supplies only compounded by overpopulation. There is no separation of the environment.

Ma Oye, an 82-year-old Laguna resident, recently said when describing the view looking out over extensive mountainside property developments, in Baguio. Developments that spread out, kilometre after kilometre, across the previously pristine mountains, “parang yung nakita mong basura na naitapon sa gubat.”  It’s like the garbage thrown out across the jungle. He didn’t mean to imply people are garbage but rather the effect of overdevelopment on the beauty of nature is obvious in ways large and small.

Salamat Kuya Oye for showing the connection between the pictures, big and small. 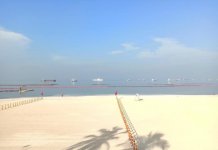 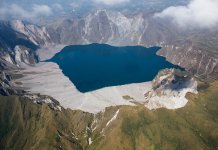 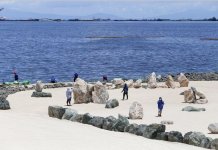